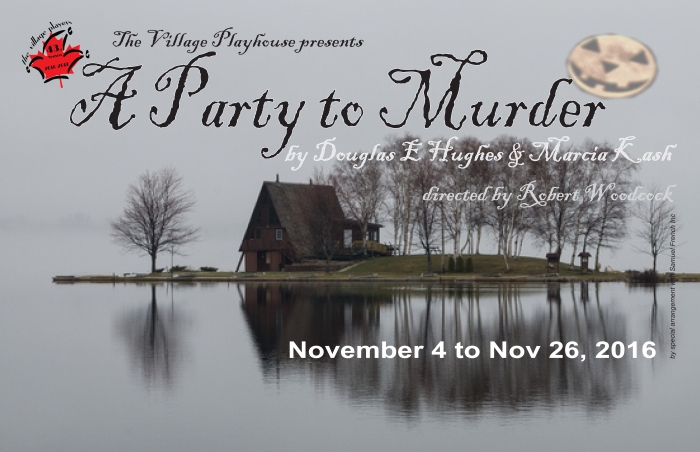 “An exclusive murder mystery weekend gets real in the darkly funny, surprising A Party to Murder. My friends and I had a great time … Really nice work from the cast in this exciting tale of intrigue and murder … big shouts to the design team for the gorgeous environment and atmospheric effects”

(all photos by Dave Fitzpatrick)

OUR AMAZING CAST  (click on the composite photo to see more)

What the play’s about:

It’s Halloween and six people have secretly gathered for a murder-mystery weekend on a private island in Ontario’s Cassandra Lakes.  As a storm rages outside, they play a game that any Agatha Christie fan would enjoy — full of spooky delights, mysterious revelations and gory murders — until suddenly the game takes on an ominous reality.  Surprises abound in this hair-raising thriller, culminating in an unexpected twist that even Agatha herself could not foresee.

The Marcia Kash & Douglas E. Hughes combo
Writing partners since 1991, their first two plays, “Who’s Under Where?” and “A Party to Murder” have had over 100 productions worldwide. Both plays, together with the hilarious period comedy Too Many Cooks have been published by Samuel French.  Another comedy, Jack of Diamonds, was staged at Hamilton’s  Theatre Aquarius in 2015. Their newest play, Something Fishy, won the Tom Hendry Award for Best New Comedy and will premiere summer of 2016 at the Lighthouse Festival Theatre in Port Dover. 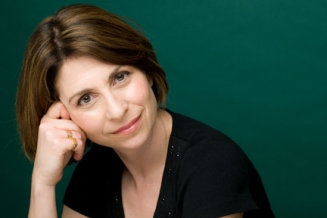 Marcia Kash trained as an actor at England’s Drama Centre and began her career at the Royal Court Theatre in London before coming to Canada in 1982.  Since then, she has appeared at the Stratford Festival, The Kennedy Center in NYC, Charlottetown Festival (4 years), Citadel Theatre Edmonton, Theatre Plus Toronto, ATP Calgary, Stage West, Theatre Calgary, and Neptune Theatre in such roles as Lady Macbeth in Macbeth, Madame de Tourvel in Les Liaisons Dangereuses; Stella in A Streetcar Named Desire, Anita in A Small Family Business; Teresa in How the Other Half Loves and Rita in the Canadian premiere of Educating Rita – as well as numerous TV, radio and commercial appearances. She has also written both plays and screenplays on her own, and is also an accomplished director.

Doug has worked as an actor for the past 33 years on stage, on television, in radio, and in film. He has appeared in theatres across Canada and in the U.S. and has spent a total of 16 seasons at the Shaw and Stratford festivals. His most recent season at Stratford included roles in Kiss Me Kate and Evita. In 2008, he received a Dora nomination for his portrayal of Alfie Byrne in Acting UpStage’s production of A Man of No Importance. Other recent credits include My Fair Lady at Huron Country Playhouse (where he played Henry Higgins), It’s a Wonderful Life at CanStage, and The Drowsy Chaperone at the Manitoba Theatre Centre and Theatre Calgary. He makes his home in Toronto.

Village Players audience members may remember Rob as the menacing Sterling in Mauritius last season. (He’s not always so scary.) That was his first time on the Village stage since his appearance in Beauty and the Beast 22 years earlier, although he has performed at many theatres throughout the GTA.  A Party to Murder is his first time directing here, after many years directing elsewhere, including: War Show (FullCast), Wizard of Oz, Seusical, Aladdin (Globe), Fiddler on the Roof, Annie (MMT), and The 39 Steps, The Full Monty, Billy Bishop Goes to War,  and Doubt (Rose Theatre).