THE LIAR IN PHOTOS:

(all production photos by Robert Rayfield)

1.“had me literally laughing out loud, sober … the entire play was just full of gut-wrenchingly hilarious physical comedy”

“As usual, the set at the Village Playhouse blew me away. It’s so tiny and intimate and they always make such a unique use of the space. My favourite part of the set was the drop windows that emerged from the ceiling.”

2. “From all these misunderstandings and a series of breathtakingly intricate lies springs one of the Western world’s greatest comedies …

“The ‘liar and truth’ scene in Act 2 between Cliton and Dorante is a commanding piece of slapstick humour … Get ready to LOL!”

THE LIAR CAST  (click on composite photo to see more) 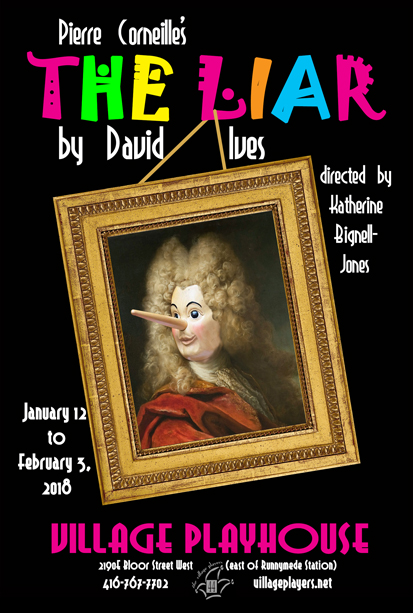 Paris, 1643. Dorante is a charming young man newly arrived in the capital, and he has but a single flaw: He cannot tell the truth. In quick succession he meets Cliton, a manservant who cannot tell a lie, and falls in love with Clarice, a charming young woman whom he unfortunately mistakes for her friend Lucrece. What our hero regrettably does not know is that Clarice is secretly engaged to his best friend Alcippe. Nor is he aware that his father is trying to get him married to Clarice, whom he thinks is Lucrece, who actually is in love with him.

From all these misunderstandings and a series of breathtakingly intricate lies springs one of the Western world’s greatest comedies, a sparkling urban romance as fresh as the day Pierre Corneille wrote it, with a hilarious verse adaptation for today by All in the Timing‘s David Ives.  It had its New York premiere at the award-winning Off-Broadway Classic Stage Company in early 2017.

“THE LIAR is, throughout, an effervescent delight. Mr. Ives’s lyric and comic invention never falters as he blends, in capering, cascading verse, both the cultivated language and decorous rhythms of classical comedy and cheeky, up-to-the-minute slang.”

About the playwrights: 1. Pierre Corneille…

Pierre Corneille (1606 – 1684), with Jean Racine and Molière, form a triumvirate of classic 17th century French playwrights. He and Racine are mostly known for their tragedies – Corneille’s Le Cid may be his most enduring, influenced by Spanish tales of the famous 11th-century warrior known as El Cid.  Corneille didn’t neglect comedy, though.  In fact, Molière’s Paris theatre company included this play – Le Menteur – in their repertoire from 1659-1666, staging it on 23 separate occasions. Le Menteur had a major production in France as recently as April, 2017 at the Théâtre national populaire de Villeurbanne.

About the playwrights: 2. David Ives…

The playwright David Ives has worn many hats over the years. He has written his own plays, both short and long, including the Tony-nominated Venus in Fur. He was for many years the go-to guy to condense the books of the musicals presented in the City Center Encores! series. And he is currently collaborating with no less than Stephen Sondheim on a breathlessly awaited new musical adapted from two Luis Buñuel movies. What’s more, in recent years he has been channeling the classical French theater, writing verse adaptations of plays by Molière (The School for Lies) and Jean-François Regnard (The Heir Apparent).

About the director, Katherine Bignell-Jones…

This will be the third consecutive season that Katherine has directed a play for Village Players’ audiences – following last year’s season opener Les Belles Soeurs, and the 2015-16 season finale Fox on the Fairway!  In 2016, she also directed God of Carnage in the Toronto Fringe and Nana’ s Naughty Knickers for Theatre Etobicoke. Other selected plays she has directed are Terror By Gaslight (Kanaidjun Entertainment), Killcreek (Bojit Productions), Who’s Under Where?  (Theatre Etobicoke), and Final Curtain (LaSalle Players).