The show has opened and runs until February 4 – get your tickets NOW!

To see more about Cast members, click on image below ⇓ 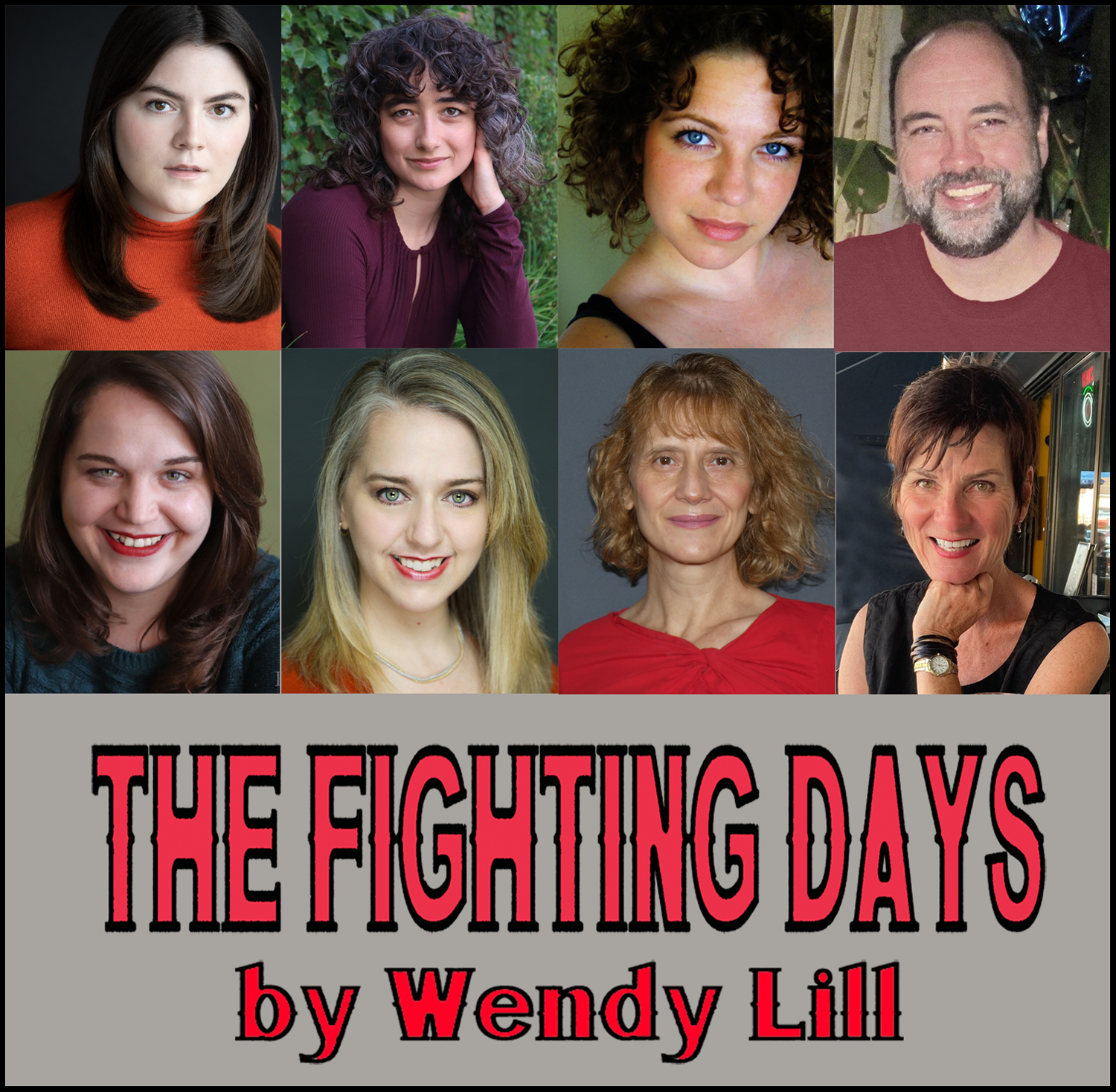 Cast for The Fighting Days 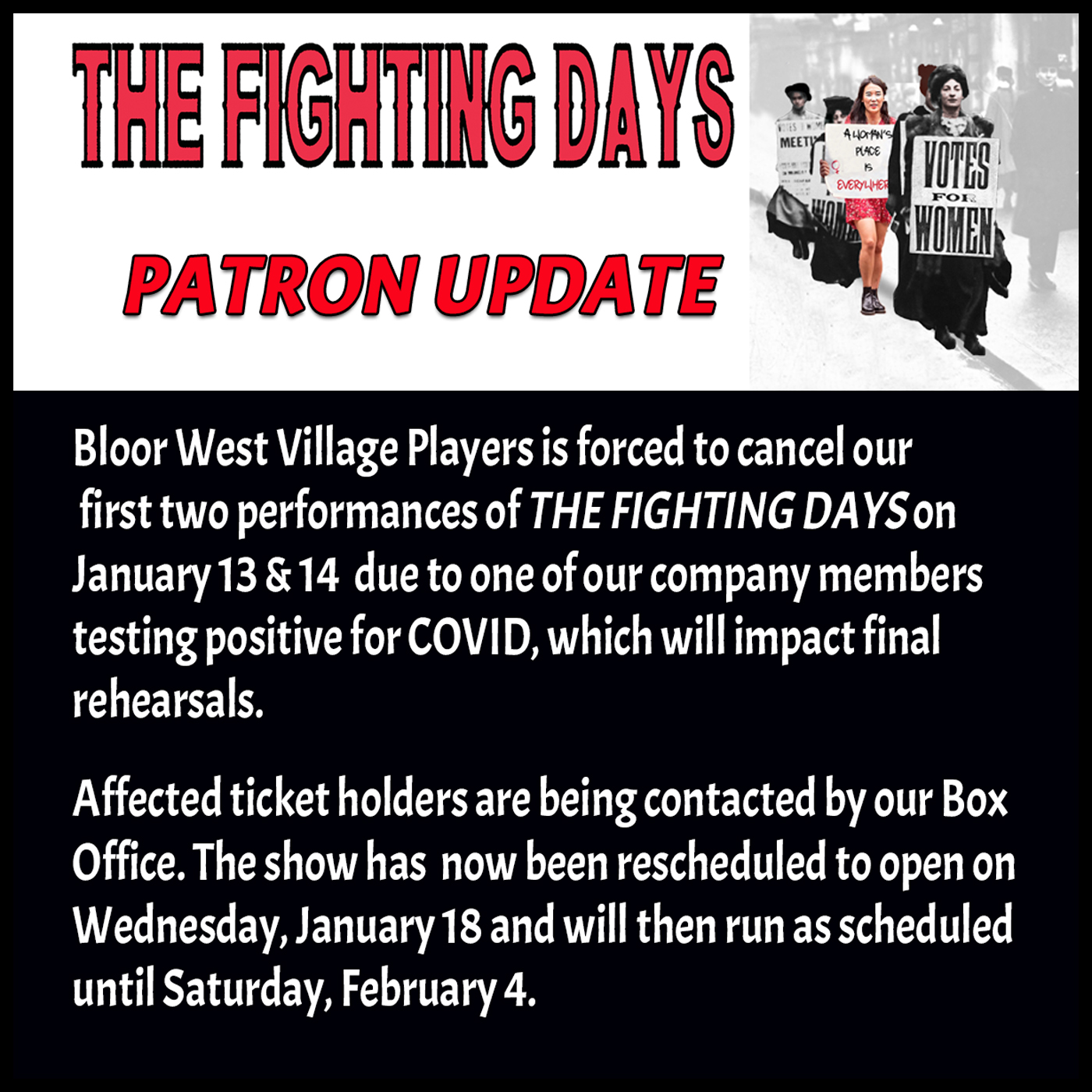 ONLINE TICKETS & TELEPHONE RESERVATIONS AVAILABLE!
(click on image below to find out how) 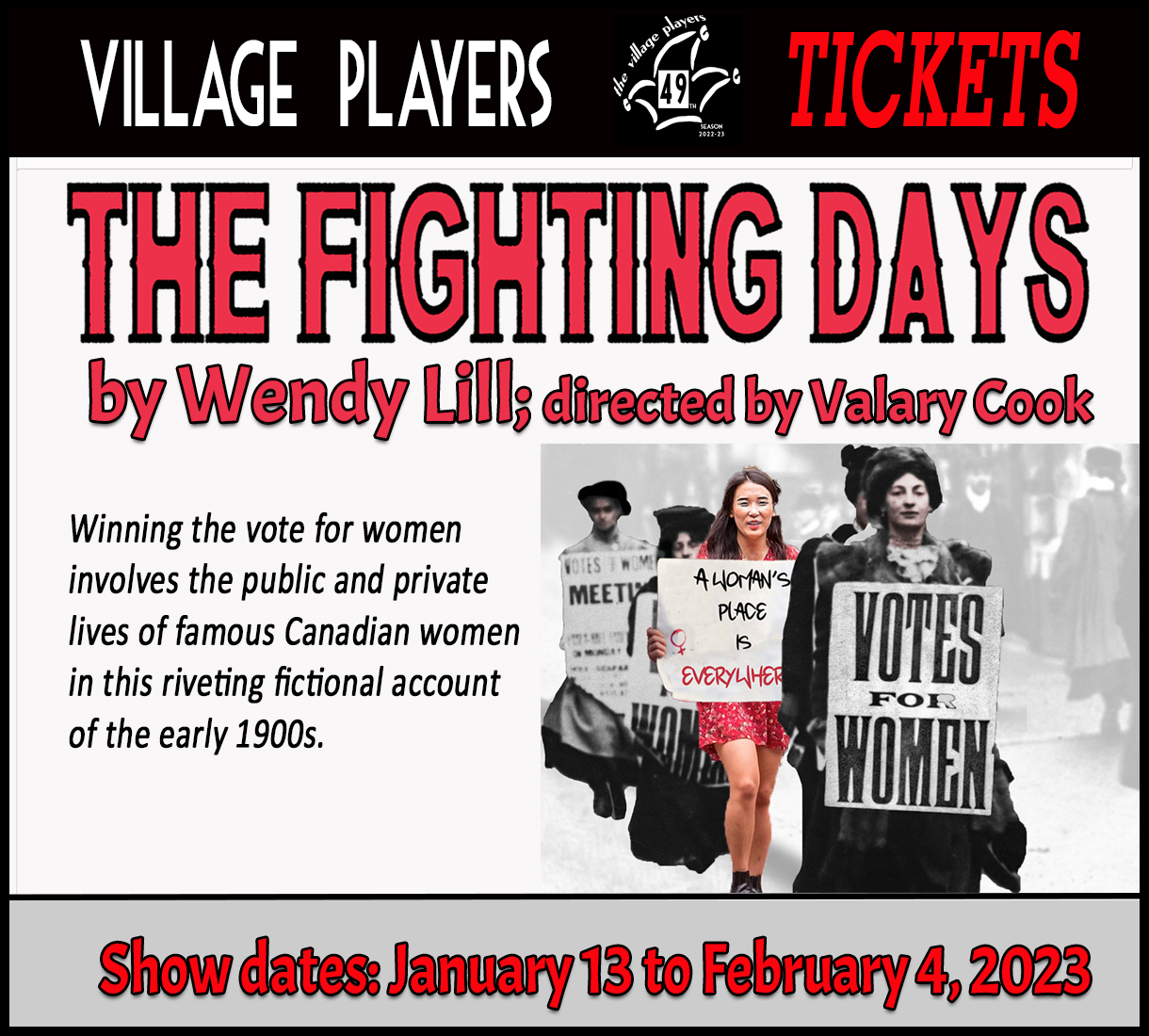 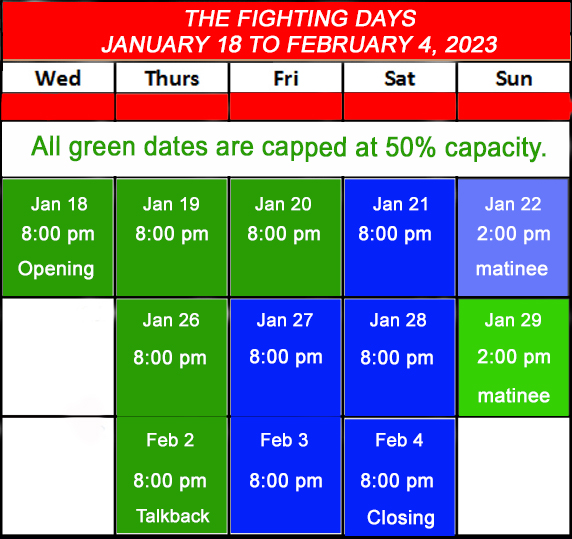 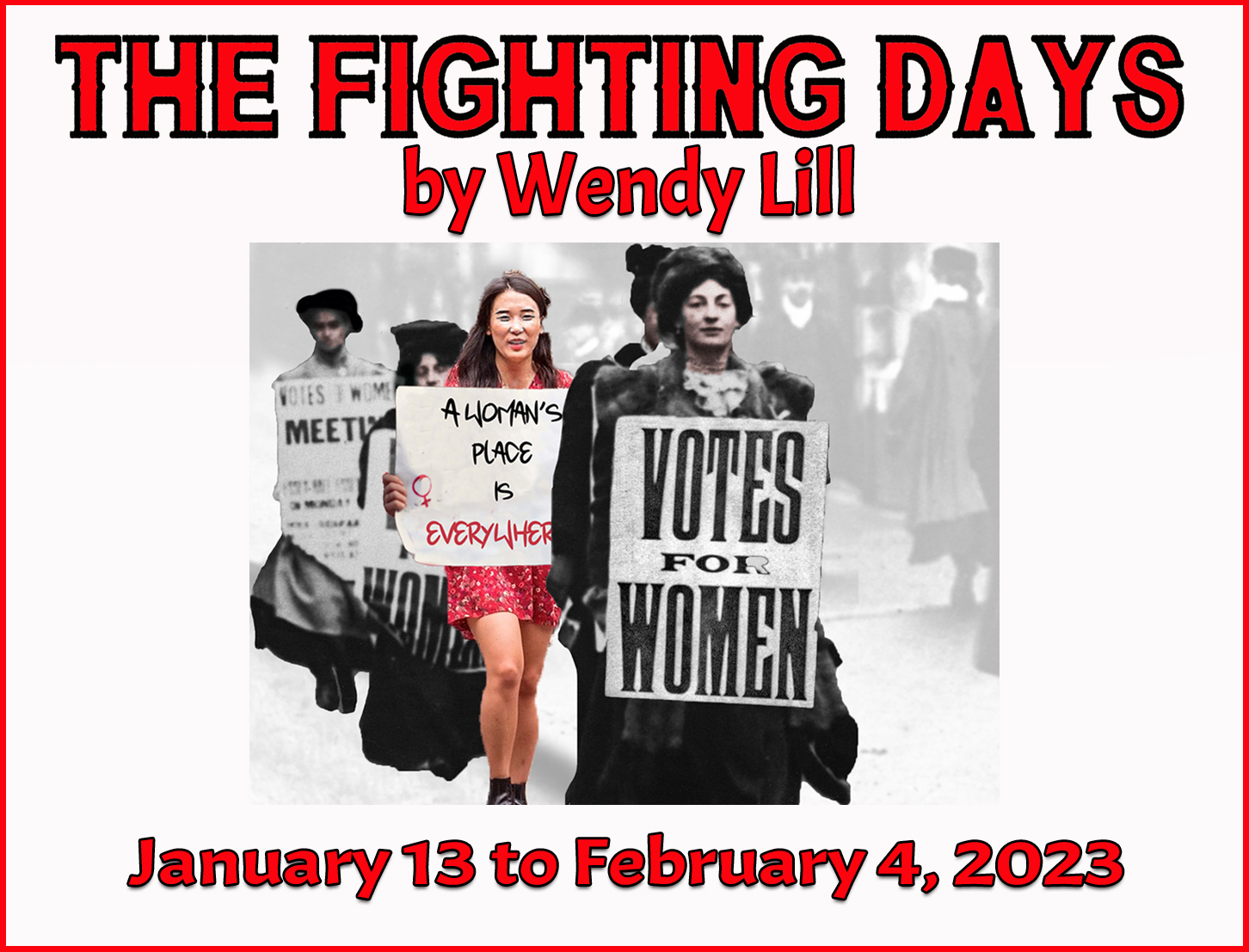 The Fighting Days is set in Winnipeg during 1910-1917 and focuses on the life and work of Francis Marion Beynon, a Manitoba journalist and political activist. When the play opens, Francis is on her way to Winnipeg, leaving behind a sheltered and religious rural childhood. Soon after her arrival she meets Nellie McClung and becomes involved in the Votes-for-Women movement. She also begins work as the women’s page editor for The Rural Review, airing her controversial political views on the editorial page. Suddenly, Canada is involved in World War I, and the conscription crisis divides the suffragists: should all women have the vote or just Dominion-born women who are sending their husbands and sons off to battle? Should women use their votes to push for conscription or to lobby for a swift end to the war?

A play about the polarities of public and private lives, and about issues of racism and pacifism within the women’s movement, The Fighting Days deals with timeless moral concerns. Francis Beynon, says the playwright, “gave up everything for her beliefs and one can only hope the world’s a better place for it.

About Wendy Lill, the playwright:

Wendy Lill has lived a truly Canadian life: born in Vancouver. raised in both London and Toronto, lived for many years in Winnipeg and now resides in Dartmouth.

She has written for magazines, radio, television, and stage. Her plays have been produced extensively on Canadian and international stages in such countries as Scotland, Denmark and Germany. Her play All Fall Down examines the roots of intolerance and hysteria and their effects on love. Sisters received the Labatt’s Canadian Play Award at the Newfoundland and Labrador Drama Festival. Primedia Productions brought out television versions of two of Lill’s plays, Sisters and Memories of You, both of which Lill scripted for the screen. (Sisters won a Gemini in 1992).

Lill has four plays nominated for a Governor General’s Award for Drama: The Glace Bay Miners’ Museum, All Fall Down, The Occupation of Heather Rose, and Corker.

Between June 1997 and June 2004, Wendy Lill was the Member of Parliament for Dartmouth and the Culture Communications critic for the federal New Democratic Party (NDP).

About Valary Cook, the director: 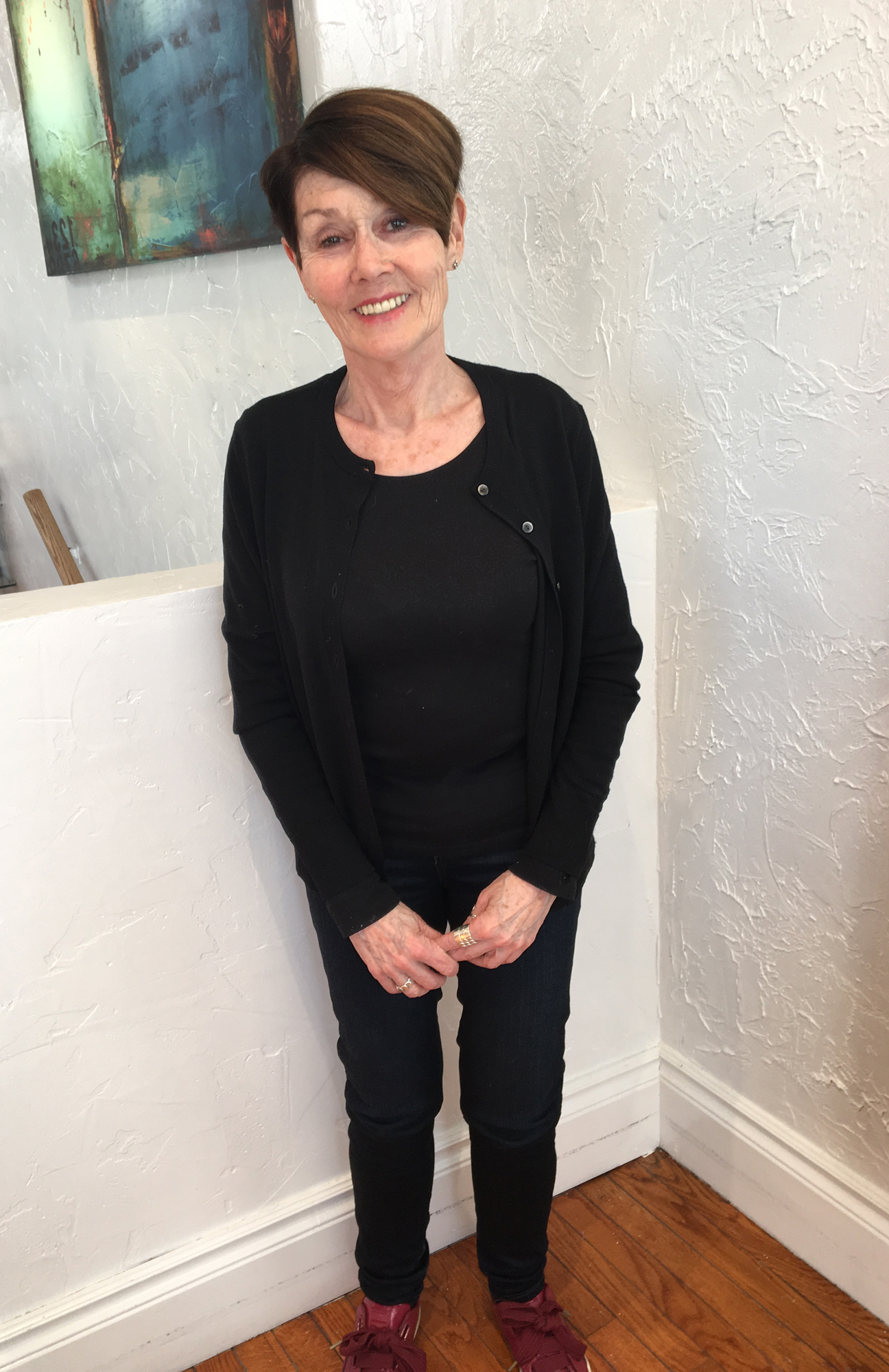 Valary honed her directing skills over thirty years as a teacher of Dramatic Arts in west end Toronto high schools: such musicals as Into the Woods, Godspell, Peter Pan, Camelot, The Baker’s Wife, and plays like Midsummer Night’s Dream, You Can’t Take It with You, and The Crucible. She also branched out into community theatre at BurlOak Theatre, several plays for Alumnae Theatre’s New Ideas Festival – and one previous play on our own stage: How to Hunt a Wooly Mammoth in Village Players’ Sweets and Treats in 2011. Not content with that, she studied directing with Richard Rose of Tarragon Theatre in 2014.

Village Players’ production of Late Company – directed by Valary – won best drama at the ACT-CO gala in 2019, along with best set design and 5 nominations including for her direction.  The play went on to the Theatre Ontario Festival that year, where we won awards for Valary’s direction and outstanding performance in a leading role as well as 3 honourable mentions.

Village Players selected Valary to direct The Fighting Days for its January, 2021 production.  We’re looking forward to it in 2023 with great anticipation.