The show has opened and runs until October 8 – get your tickets NOW!

All production photos by Dave Fitzpatrick

To see more about our cast, click on image below ⇓

ONLINE TICKETS & TELEPHONE RESERVATIONS AVAILABLE!
(click on image above to find out how) 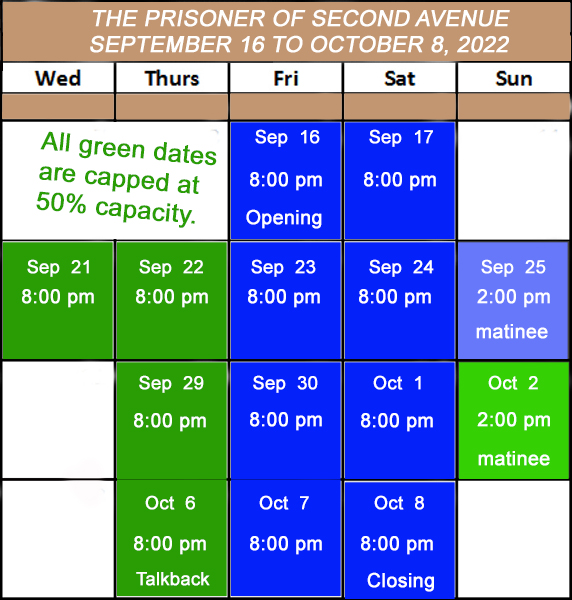 Mel Edison is a well-paid executive of a high-end Manhattan firm, until it suddenly hits the skids, and he gets the ax. His wife Edna takes a job to tide them over, then she too gets sacked. Compounded by the air-pollution killing his plants, and with the walls of the apartment being paper-thin, allowing him a constant earful of his neighbors private lives, things can’t seem to get any worse…Then he’s robbed, and his psychiatrist dies with $23,000 of his money. Mel does the only thing left for him to do-he has a nervous breakdown and it’s the best thing that ever happened to him.

“A gift for taking a grave subject and, without losing sight of its basic seriousness, treating it with hearty but sympathetic humor…A talent for writing a wonderful funny line…full of humor and intelligence. Fine fun.”
~ New York Post

About Neil Simon, the playwright:

Neil Simon was arguably the most successful playwright in American history, an icon whose works captured the zeitgeist of American middle-class life for much of the 20th century. One of only three playwrights whose name graces a Broadway theater (along with August Wilson and Eugene O’Neill), Simon was known for his long-running stage comedies, many of which were hysterically funny even as they drew on real cultural anxieties and states of modern life. The most famous of these is The Odd Couple, the smash theater hit that became an even bigger movie. Simon was a four-time Oscar nominee and a staggering 17-time Tony nominee; he won three times and received a special Tony in 1975; he was awarded the Pulitzer Prize for 1991’s Lost in Yonkers. Simon died in 2018 at age 91,

About Michael Hiller, the director:

This will be the sixth play he has directed for Village Players, following Nuts (2011), Beyond Therapy (2012), Mauritius (2016), Moonlight and Magnolias (2019), and The 39 Steps earlier this year. Plays directed elsewhere include The Night Joe Dolan’s Car Broke Down, Is He Dead?, The Odd Couple, The Odd Couple (Female), 5 Women Wearing the Same Dress, Sweet Charity, A Chorus of Disapproval, Godspell, Harvey, Arsenic and Old Lace and many more.

Michael continued to contribute to Village Players during the pandemic, directing a rehearsed zoom reading and acting as film director and editor of a one-act play (Vice Versa).  We’re looking forward to his latest creative work.