THE 39 STEPS
adapted by Patrick Barlow from the novel by John Buchan and the movie by Alfred Hitchcock
(May 4 to 21, 2022)
Director: Michael Hiller
Producer: Anne Harper

All photos by Jennifer Etches 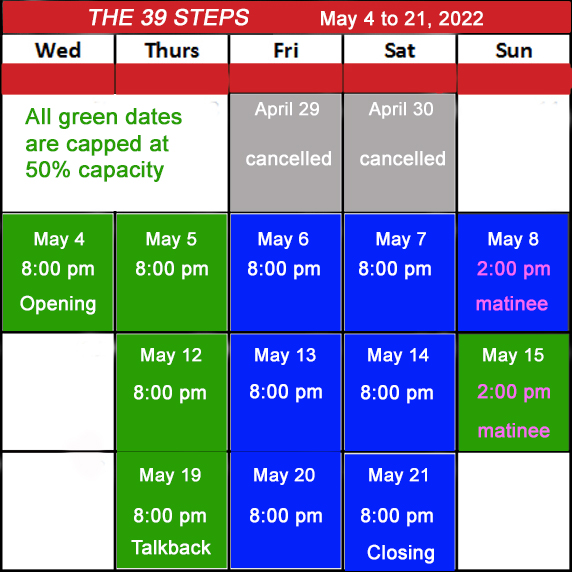 MASKS AND PROOF OF VACCINATION REQUIRED FOR ALL DATES

As ever, our prime concerns are the health and safety of our patrons, our members and the cast and crew of our shows. We work hard to create a safe space whilst ensuring that we follow government guidelines — and not just to the minimum.

To see more about our cast, click on image below ⇓

Mix a Hitchcock masterpiece with a juicy spy novel, add a dash of Monty Python and you have the intriguing, thrilling, riotous and unmissable comedy. The show hurtles a notorious fugitive and a spellbound blonde from a London music hall north by northwest to Scotland’s most remote highlands. Will they save Britain from a den of devious spies? A cast of four actors plays over 150 characters in this fast-paced tale of an ordinary man on an extraordinarily entertaining adventure. The 39 Steps contains every single legendary scene from the award-winning movie — including the chase on the Flying Scotsman, the escape on the Forth Bridge, the first theatrical bi-plane crash ever staged and the sensational death-defying finale in the London Palladium.

The 39 Steps has played in over forty countries worldwide, winning Olivier, Helpmann, Moliere and Tony Awards and making Patrick the most performed playwright in America for 2012/13.

About Patrick Barlow, the playwright:

Patrick Barlow is an English actor, comedian and playwright.

As a playwright, Patrick has also adapted Lew Wallace’s Ben Hur; his Olivier-nominated adaptation of A Christmas Carol has played off-Broadway and London’s West End. His rewriting of John Milton’s Comus has played to critical acclaim at Shakespeare’s Globe Theatre.

Patrick is also celebrated in the UK for his two-man theatre company National Theatre of Brent, whose comedy epics include Wagner’s Ring Cycle, The Charles and Diana Story, The Messiah, The Wonder of Sex, The Arts and How They Was Done, The Black Hole of Calcutta, The Life and Times of the Dalai Lama and Zulu! They have won two Sony Gold Awards, a Premier Ondas Award for Best European Comedy and the New York Festival Gold Award for Best Comedy.

Other screenwriting includes Van Gogh (Prix Futura Berlin Film Festival), Revolution!! (Best Comedy Jerusalem Film Festival) and the BAFTA-winning The Young Visiters. Publications include Shakespeare: The Truth! and The Complete History of the Whole World. Patrick has also appeared in Absolutely Fabulous, Shakespeare in Love, Notting Hill, Nanny McPhee and Bridget Jones’s Diary. He is currently writing theatre versions of The Hound of the Baskervilles and Dracula.

About Michael Hiller, the director…

This will be the fifth play he has directed for Village Players, following Nuts (2011), Beyond Therapy (2012), Mauritius (2016), and Moonlight and Magnolias (2019). Plays directed elsewhere include The Night Joe Dolan’s Car Broke Down, Is He Dead?, The Odd Couple, The Odd Couple (Female), 5 Women Wearing the Same Dress, Sweet Charity, A Chorus of Disapproval, Godspell, Harvey, Arsenic and Old Lace and many more.

Michael continued to contribute to Village Players during the pandemic, directing a rehearsed zoom reading and acting as film director and editor of a one-act play (Vice Versa)

Michael spoke frankly about this play when talking with the Village two years ago:

“What is going to be required is a special level of cooperation between the creative team in terms of design, props, set and technical. It should be an artistic collaboration from all involved.”

We’re excited looking forward to the result, and we think you will be, too.