All photos by Graeme Hay

“Great work from the cast in this zany, improbable tale…”

“Candy makes a likeable cad as the pompous, ambitious Fleming”

“With big shouts to the small army of Village Playhouse volunteers … featuring stage manager Margot Devlin at the helm, keeping the show up and running from the booth.”

“Mr. Buote’s bombastic and grandiose performance as Selznick is marvelous to watch”

“seeing Mr. Candy’s first entrance as Victor Fleming reminded me of a combination of Jimmy Stewart and Henry Fonda.”

“ Celine Gunton carefully reflects the matter of fact business like demeanor needed to survive working in film during the golden years of Hollywood.”

HERE’S OUR CAST!  (click on composite photo to see more)

About the play….
Legendary film producer David O. Selznick is five weeks into shooting Gone With the Wind when he realizes the script is awful, and that the director doesn’t have a clue. He has five days to replace them, and restart the shoot, or the production will shut down. Selznick calls Victor Fleming from the set of The Wizard to Oz to direct, and he taps legendary playwright, screenwriter and script doctor Ben Hecht to rewrite the script. There’s only one problem: Hecht hasn’t read the book.

Over the course of five madcap days, the three men, assisted by Selznick’s assistant, Miss Poppenghul, frantically craft one of the most beloved screenplays of all time. As Selznick and Fleming act out the book for Hecht, the phone rings off the hook with calls from the likes of Vivien Leigh, Louis B. Mayer and Ed Sullivan.

Hutchinson’s play, based on historical events, is written as farce, but the characters also deal with serious questions about race and the fragile position of Jewish executives in Hollywood.

“At once a hyperventilating slapstick comedy, an impassioned love song and a blazing critique of Hollywood.”    ~ Chicago Sun Times.
“Consumers of vintage Hollywood insider stories will eat up Hutchinson’s diverting conjecture as to what actually happened behind those closed doors.”         ~ Variety.
“Frankly, my dear, this is one funny play.”              ~ NY Daily News

About Ron Hutchinson, the playwright…. 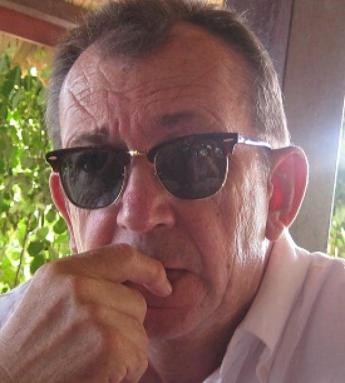 Ron Hutchinson was born in County Antrim, Northern Ireland in 1947, and brought up in Coventry, England. He wrote while working at several jobs, including carpet fitter, fish gutter and Social Security Department fraud investigator, and got his first break with a television play for the BBC. A series of television plays and series then followed, including two series of Bird of Prey starring the late Richard Griffiths.

Hutchinson’s first stage play, Says I Says He was produced at the Sheffield Crucible, Royal Court Theatre, London and Mark Taper Forum, Los Angeles and led to his becoming Writer-in-Residence at the Royal Shakespeare Company. Moonlight and Magnolias has been his most popular play, but The Tricycle won the New York Critic’s Circle Comedy Award in 2004. Others include Rat in the Skull, The Master and Margarita, Beau!, Lags, Head Lags, Head/Case, and adaptations of The Captain of Kopenick and Mikhail Bulgakov’s Flight.

He then moved to Los Angeles, where he wrote and produced extensively for American cable and network companies, including HBO, ABC, NBC, CBS, Lifetime and Showtime, while teaching screen-writing at the American Film Institute. He won an Emmy for his screenplay of Murderers Among Us; The Simon Wiesenthal Story, and has three other Emmy nominations.

About Michael Hiller, the director…

This will be the fourth play he has directed for Village Players, following Nuts (2011), Beyond Therapy (2012), and Mauritius (2016). Plays directed elsewhere include The Night Joe Dolan’s Car Broke Down, Is He Dead?, The Odd Couple, The Odd Couple (Female), 5 Women Wearing the Same Dress, Sweet Charity, A Chorus of Disapproval, Godspell, Harvey, Arsenic and Old Lace and many more.